My Own Silicon Heaven

For some variety and whilst I’m stuck at home under corona virus lock-down I thought I’d start to catalogue my old computer and test equipment collection. I’ll tag these as ‘Silicon Heaven’ because, according to Red Dwarf, that’s where electronic equipment goes when it dies. Without this afterlife to believe in then why else would these items accept a miserable life of servitude to humans? Red Dwarf can be childishly funny one moment and deeply insightful the next.

Not that these items are dead – well some are but I shall try to resuscitate them. They’re simply obsolete. Still capable of their original purpose but now superseded by something faster, cheaper and with a lifespan that’ll be shockingly short in comparison to these old time devices.

I tried to sumarise the characteristics that make something eligible for my own Silicon Heaven and struggled to do so. It’s not an age thing or a specific manufacturer or type of device. Some don’t even have any silicon in them… I guess I just find them interesting and/or useful, their inner workings are understandable and therefore repairable and they’re fairly cheap but the electronic equivalents of endangered species.

As a first item to catalogue I’ve chosen something really simple yet synonymous with the building blocks of all computers. A Combinational Logic Tutor.

This device is a practical teaching aid for schools, colleges and universities to demonstrate simple logic gates and what can be achieved by combining them.

You’ll see from other posts on this site that such low level computational processes are of great interest to me yet I never had one of these Tutor devices when I was studying. Sadly I struggled with Boolean algebra and De Morgan’s laws with just a pen and paper to guide me. There was little scope for experiment or a trial & error approach where we learn from correcting our mistakes. 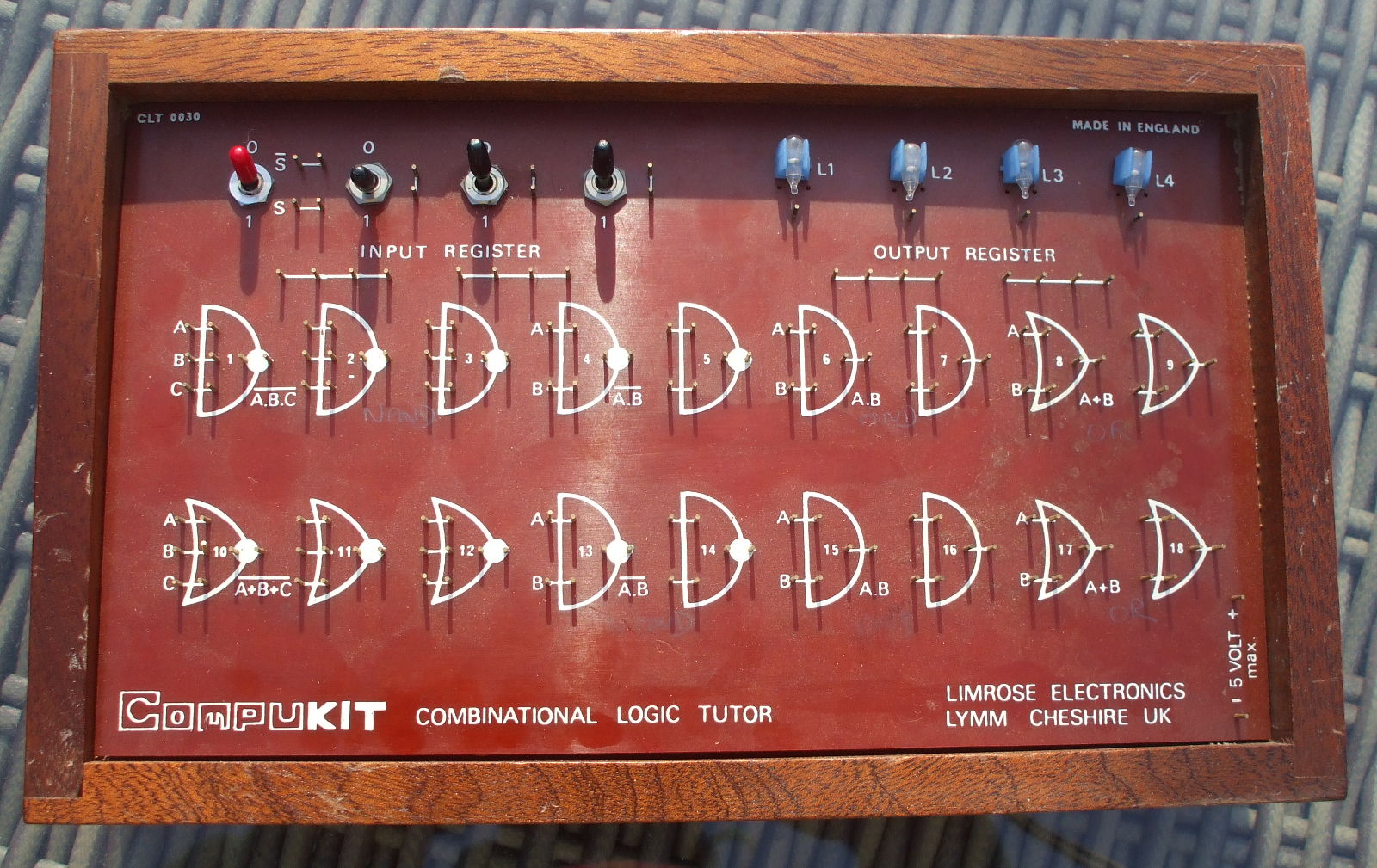 The Combinational Logic Tutor is like the forerunner of a breadboard where wires can be connected to pins rather than pushed into the board. These pins are laid out over some traditional logic symbols (NOR, NAND, AND and OR) so that the output from one logic gate can be fed into the input of the next logic gate and so a combinational logic algorithm can be formed. In total the unit has:

In addition to the logic gates there are 4 toggle switches for inputs and 4 miniature bulbs for outputs. Although external inputs and outputs could also be easily connected.

There are also 2 pins for external power provision although their labeling is misleading as | 5 VOLT + Max. looks like 15V rather than the intended 5V with the minus and plus signs either side of it to identify the pins.

I was first attracted to this unit because of its COMPUKIT name but this Tutor doesn’t share any heritage with the Compukit UK101 , a late 1970’s build your own computer kit that is now much sought after.

This COMPUKIT was designed and made by Limrose Electronics from Lymm in Cheshire, UK. Which didn’t take much research because it’s proudly labelled on the front panel of the Tutor. There’s also a CLT0030 model number in the top left.

I’ve been unable to find anything about this version of the Tutor on the Internet but I did find that Limrose Electronics are still trading and they do still list a CLT0030 in their catalogue. The modern variant is blue and has a built in mains power supply unit but the layout of the front panel appears to be unchanged. At £180 it’s a tad more expensive than the £7.50 I paid for mine but undoubtedly more educational than the pen & paper or online simulator alternatives.

Limrose provide a variety of educational units and some of the very early versions of these can be found in online museums such as the Compukit 1 in the Early Computers Collection where they also have a Deluxe model listed and some brochures. These have been helpful to understand the history and construction of my own unit.

The old brochure for a similar unit describes them as coming in a ‘handsome cabinet’. They’re also apparently ‘student proof’ which must be one up from Mil-Spec!

This cabinet is a hardwood frame with a few chips and scratches measuring roughly the size of a sheet of A4 paper, 27x16cm and 5cm deep. There are rebate joints on the corners (what would be called rabbeted joints in the US) and a back panel made of plywood.

It’s the front panel that holds all the interesting stuff and this appears to be made from brown fibreglass that has the look of an old phenolic paper board but is stronger.

All the white printed lettering and logic symbols are intact and other than some grime and pencil marks (is writing the names of the logic gates cheating?) the whole unit appears to be in good condition for its age.

The front panel is not fixed down onto the frame along the bottom and left side and it won’t push back into place as something inside is in the way?

Two 1mm gold plated brass pins protrude from the inputs and output of each logic gate. I counted 152 pins in total, including those beside the switches, bulbs and power input.

The miniature bulbs (what I would call ‘grain of wheat’ size) will apparently light dimly when the unit is powered on and each will ‘brighten’ if a logic 1 is applied. Although as a general rule I never power-up an old device until I have checked it inside and out first.

Of the 4 input switches the rightmost has a red toggle and is labelled as S and S so presumably to represent a clock signal? The other 3 have black toggles and are simply labelled as 1 or 0 for binary input.

Three switches have a clear metallic click action but one has a dull quiet action so hopefully it’s still operational.

On the right-hand side of the cabinet is a cut-out containing the power switch. This clicks ok but there are no markings to indicate on or off.

Underneath there are 6 brass screws that protrude a little and there are also 7 staples that must be holding something inside.

Removing the 1/2″ self-tapping brass screws allows the plywood back to be removed. Those staples were for a simple battery compartment, one block of which is cracked and loose.

I was surprised to find a battery inside because the front panel indicated an external 5V supply was needed. I try to keep batteries out of old equipment because they can be quite corrosive if they leak.

This battery is a 4.5V Ever Ready 126. They’re listed in the old brochure as an optional extra costing 20p! There is some staining on the cardboard sides of this zinc-carbon battery but otherwise it is intact and I see that they can sell on eBay for more than I paid for this Logic Tutor! I shall put it on my #TODO list for a clean-up and to replace its internal cells. 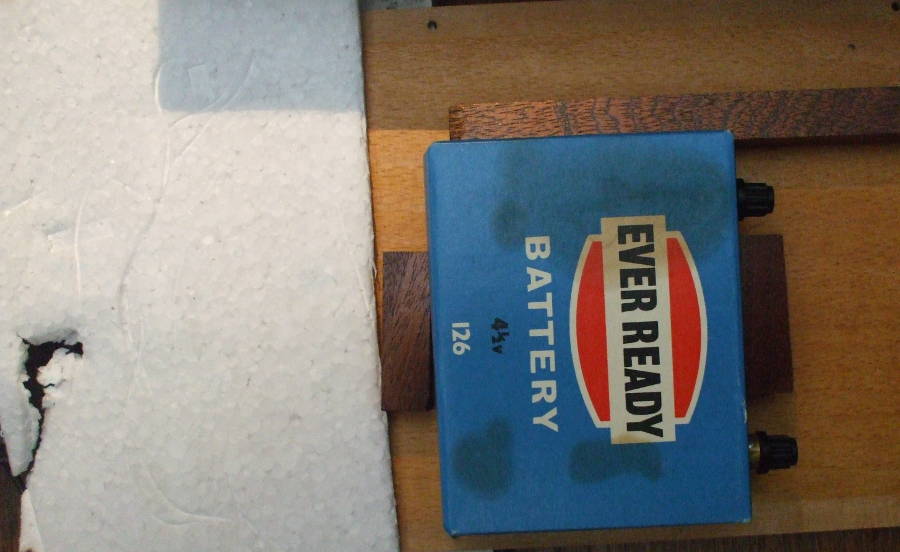 The battery was out of its compartment and the cause of the front panel being pushed up in one corner. It wasn’t even connected to the unit although there were some brown and black wires to do so. The bare ends of these wires could easily have caused short circuits had an external supply been attached. If the wires had been connected then reverse charging of the battery would have occurred. These are not rechargeable cells so I’m not sure what the outcome would have been. Although switching the side power switch to off would have issolated the battery and the unit would still work with externally provided power.

Probably original, a thin sheet of polystyrene is used to act as a cushion between the battery and circuit board. Now shriveled, stuck to the wires and not much use.

On the reverse of the front panel is a circuit board containing a natural free-hand design of traces and all components appear to have been hand soldered. In this photo I have backlit the front panel to show how the traces from each TTL chip breakout to the input and output pins of each logic symbol. 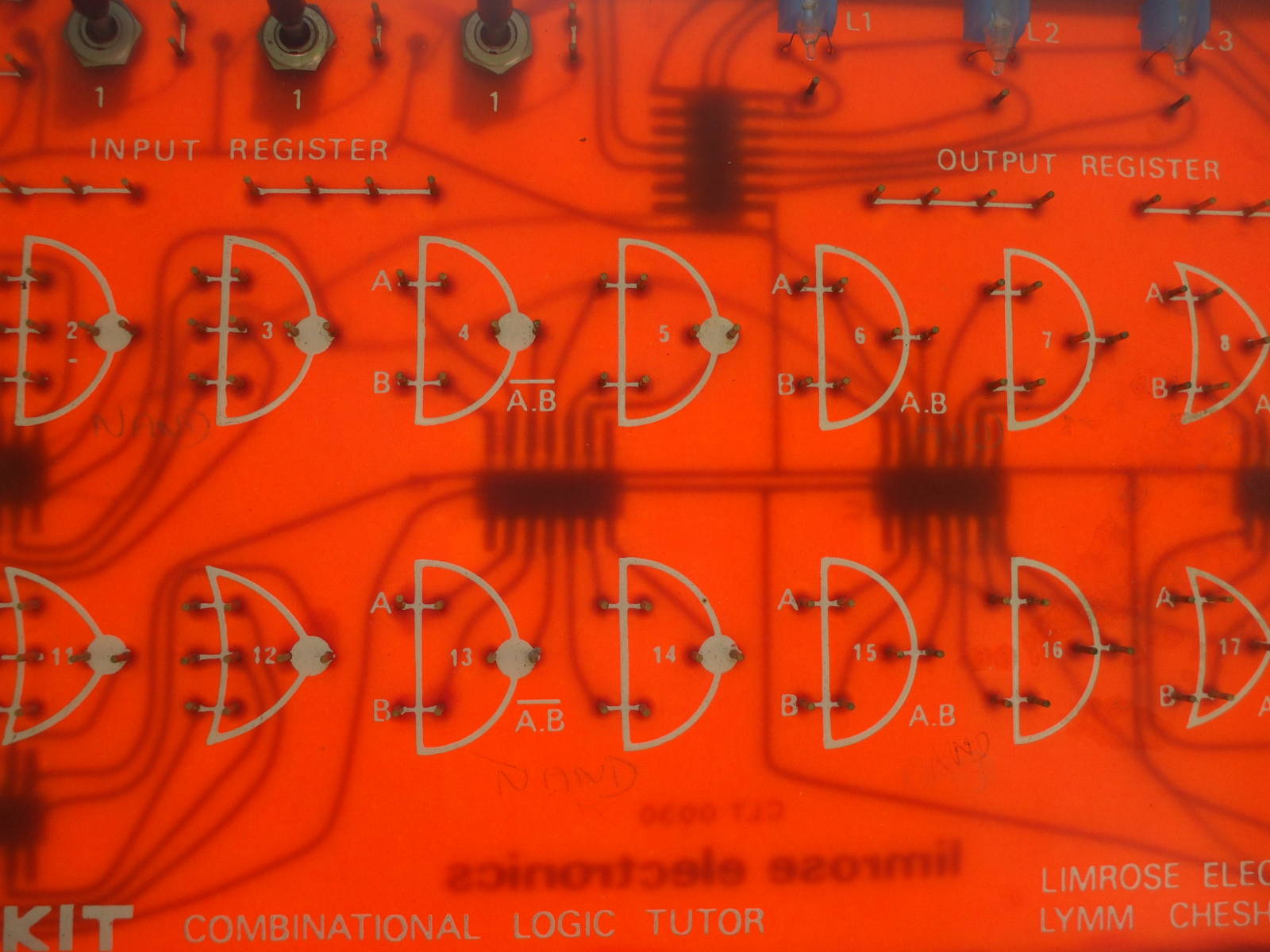 Along with the tinned tracks and a tinned ‘limrose electronics CLT 0030’ on the board there are also some tinned ‘U’s to show the orientation required for the logic chips. These 74 series TTL chips have had their legs splayed so that they can be surface mounted rather than through-hole (which would have messed up the front panel).

Four of the ICs show a Texas Instruments logo and include the TI prefix ‘SN’ to their name and 2 show no manufacturer logo or prefix. Their date codes range from the 44th week of 1971 to the 11th week of 1972 so this whole unit probably dates from around April 1972. The 74LS series of TTL chips that I’ve been using to build my Hol-1 CPU were not introduced till 1976.

The six IC’s from top to bottom, left to right are: 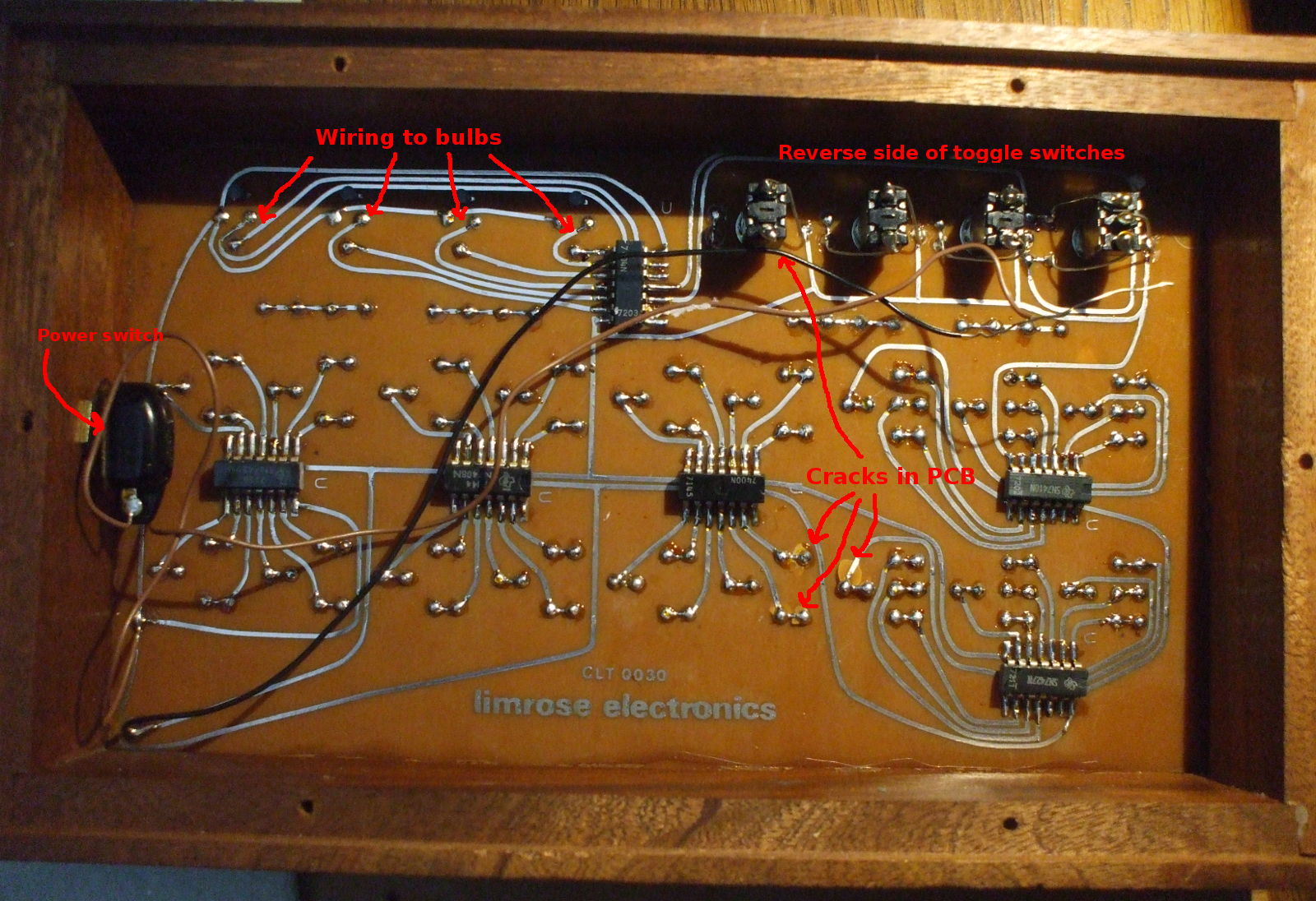 3 pins toward the centre right must have taken a knock during its life and have cracked and pushed out the back of the PCB slightly but not enough to break any tracks. There are also cracks around the toggle switch nearer the centre. None of these cracks are visible from the front panel.

Well I can hardly call this a restoration, more of a quick fix-up and clean before powering the unit up and testing each function.

I don’t plan to leave a battery inside this unit so I will use the external power pins instead when I wish to use it. To prevent the loose battery leads from shorting I’ve covered the ends with insulation tape and stuck them to the inside wall of the unit.

The few cracks in the PCB have been stuck down with superglue to prevent them moving further and breaking any traces. A weaker wood glue was used to attach the PCB front panel to the wooden frame and repair the broken battery compartment. I’ve realised that the back had been fitted upside down, resulting in protruding screws, a broken battery compartment and a loose battery.

The penciled gate names were easily removed with an eraser and the whole unit cleaned with a cloth soaked with isopropyl alcohol (having first checked the white lettering wouldn’t dissolve). Whilst removing some grime I discovered that the side power switch does have ON/OFF markings on a washer that surrounds it.

Originally the Logic Tutor would have been supplied with a pack of jump leads. As these have long gone I made up a batch with some stranded 16awg cable and female crimps to suit the 1mm pins on the Tutor.

On power-up from a 5V supply all the bulbs lit fully. This was a good sign as they’re possibly the component most likely to have been broken.

Using jumper wires I then proved that all the switches worked correctly and I then tested each of the 18 logic gates individually. The TTL chips were unlikely to have been faulty but then I didn’t know what life this Logic Tutor has had.

All worked perfectly so no further repairs were needed.

I then built a few combinational logic circuits and found the Tutor fun to use. Below is a working half-adder with carry using five NAND gates. This would have been simpler if the Tutor had some XOR gates but one of the points of a unit like this is to show that any logic gate can be replicated by using a combination of other gates. So much so that many modern logic designs focus solely on NAND or sometimes NOR gates. 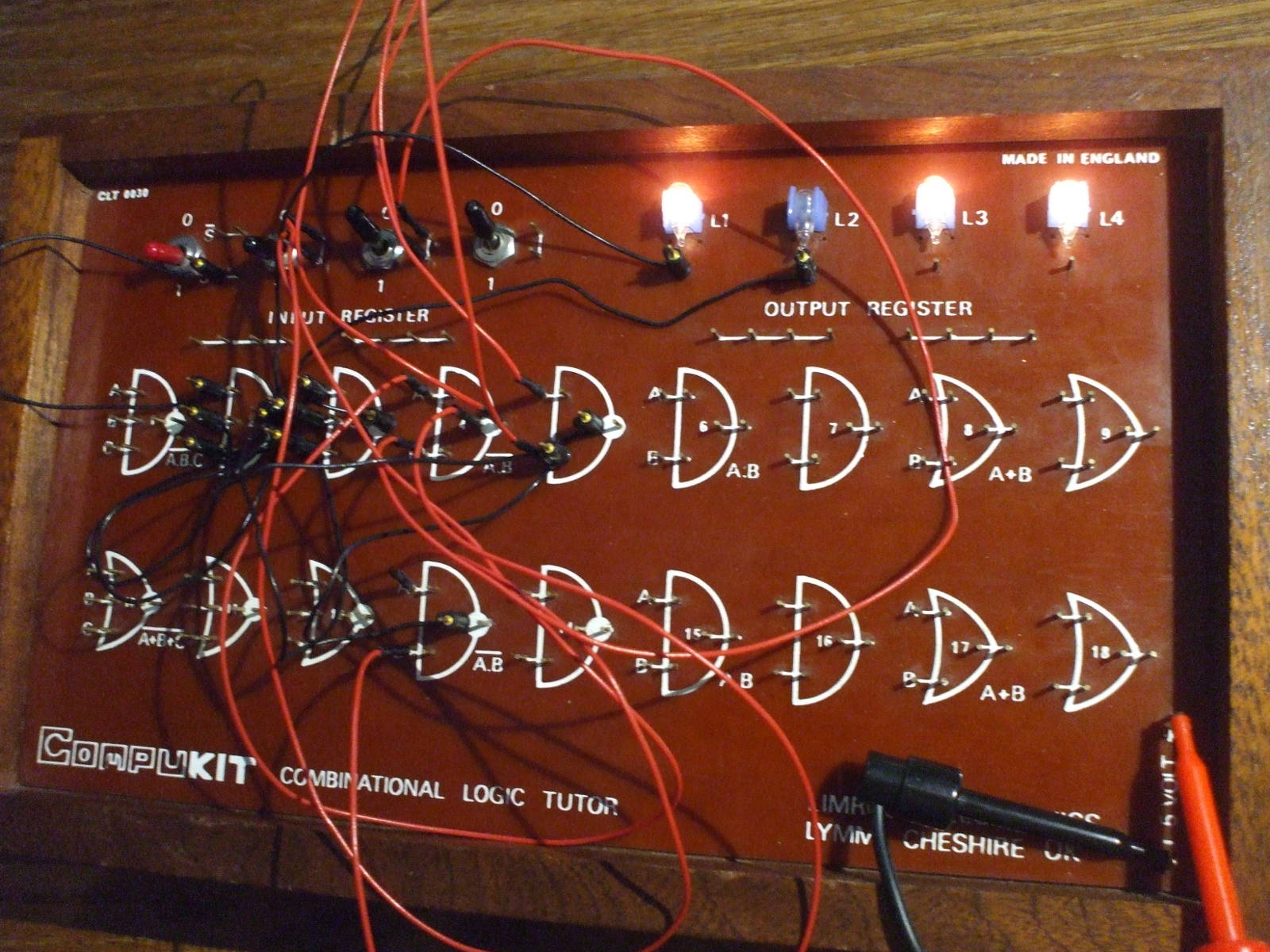 Well this Combinational Logic Tutor may not be a computer but it certainly deserves its place in my Silicon Heaven collection.