For some variety I thought I’d add an electronics post to this website. This isn’t really a complete project but more of a hacking session with an 8×8 LED matrix.
Taking time to understand and experiment with even such a basic component is a useful way of learning tricks that can be incorporated into future projects. Finding your own way can also be a rewarding challenge and what you discover tends to stick in your memory better than if you’d just read about it.

So this is what I did…

I’m using a cheap (<£1) 8 by 8 array of LEDs in a package with 16 pins. The model number printed on the side reads 1088AS and a search on that will provide a basic schematic that shows what the pins are for.

To get the pin orientation of the matrix look at the labelled edge. The pins on that side are 1-8 and they’re 16-9 on the far side. As per normal DIL packages the lowest pin is opposite the highest pin.
To protect the LEDs I put a 1k resistor onto each row pin. Thereby ensuring a resistor in each circuit (between Arduino pin, via LED and resistor, and back to Arduino). 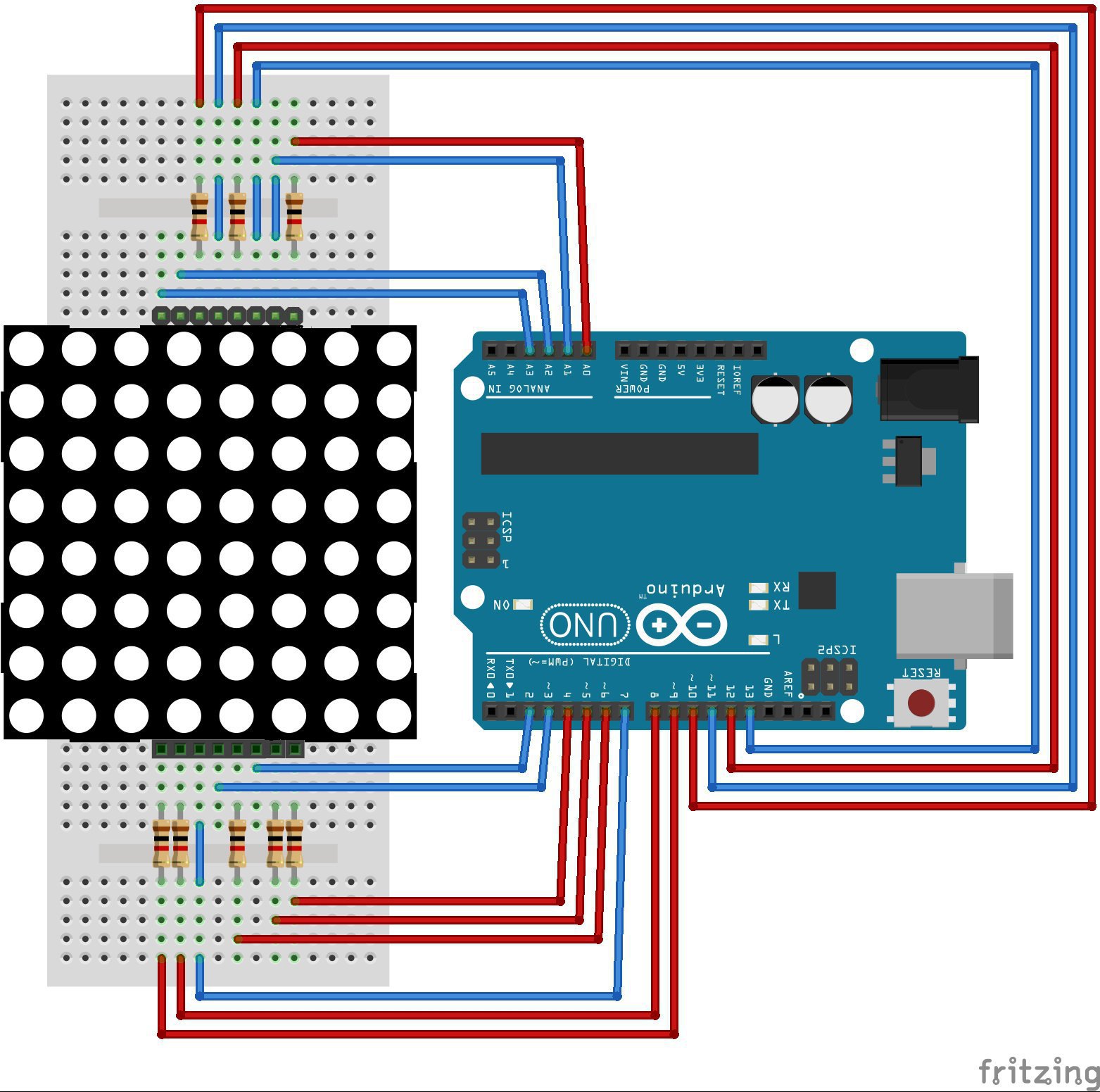 To start with I had a single light moving around the perimeter of the matrix. But that was too simple so I added a variable length ‘tail’ of lights to follow it.

The setup function sets each of our row and column pins as digital outputs. Makes sure all LEDs are turned off before we start and initialises the tail array.

The loop function traces the outline of the 8×8 matrix simply by running through a series of loops to identify which pin to turn on. The function ledout() will deal with turning the LEDs off and on. That way I could modify the loop function to display different patterns without having to change the digital output commands.
You’ll notice that I’m addressing each LED in the matrix as a number between 0 and 63.

In this example only one LED is lit at a time, followed by a short delay before turning the LED off. Because this happens so quickly it will give the illusion of a constant line of lit LEDs moving around the matrix.
As a variation a longer delay for the first LED in the line can cause the leading light to appear a bit brighter than the rest of the tail.

A solution to this flicker is to treat the tiny 8×8 matrix like a TV and display each of the eight rows in turn. Moving from top to bottom in a raster scan fashion. Each full display will then always consist of 8 digital outputs (plus turning LEDs off again) so, once the delay is suitably adjusted, the image remains flicker free no matter how many LEDs are lit.